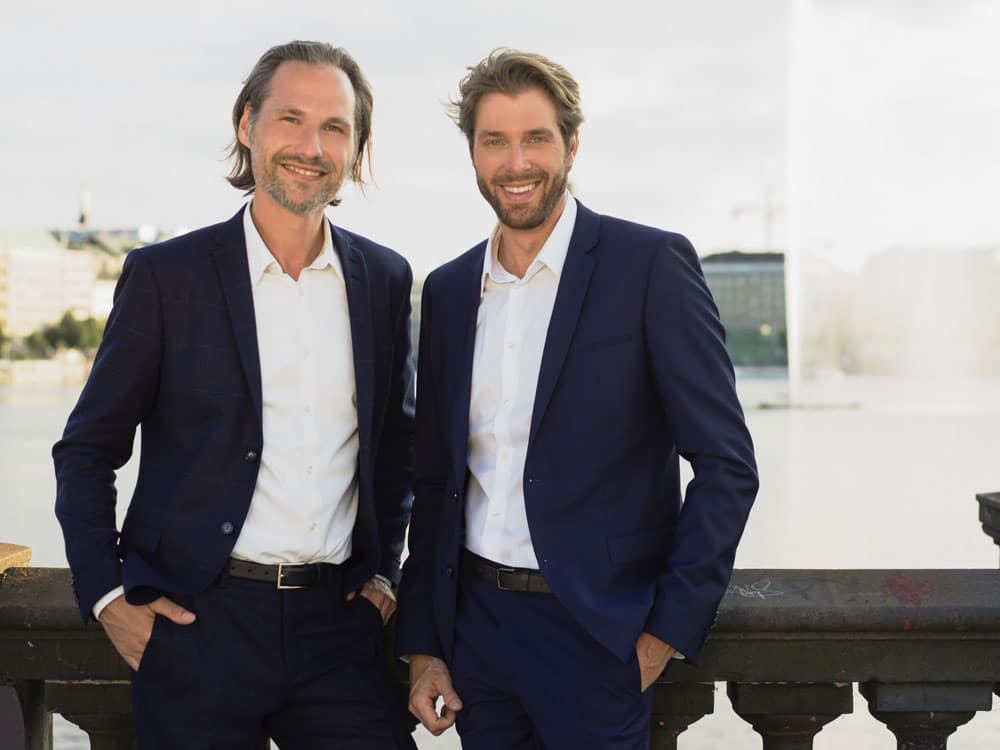 ArthroFill is the result of years of development, born from the passion of two founders for sport, wellness and health.

The company was founded in 2010 in Hamburg. Already 40 years earlier, in the 1970s, veterinarians began using hyaluronic acid to support joints. First as an injection. Since the 1990s, hyaluronic acid has also been injected in human medicine for osteoarthritis. Hyaluronic acid has been used as a feed additive for sport horses since the 2000s.

The two company founders – one grew up on a sport horse farm in Schleswig-Holstein, the other comes from a family of doctors in the Rhineland – asked themselves why hyaluronic acid is not also used as a dietary supplement in humans.

Initial research led to a study by Toho University in Japan in 2002. This study shows that hyaluronic acid ingested through food can even reach the layers of the skin. The founders developed the vision that has determined the company to this day: to create products that start deeply and support the body in using hyaluronic acid to improve the body’s ability to retain water and thus restore a natural balance.

In 2012 the young company published PROCEANIS the world’s first as a pioneer Hyaluronic drink . After more years of research and development, it will appear in October 2014 ArthroFill .

Since then, ArthroFill has recorded a steadily growing number of satisfied customers.

After four years of exploring the market, researching, developing and setting up a production facility, the founders of the biotech company Proceanis brought their Arthrofill nutritional supplement to pharmacies. “It was a long, exhausting journey,” says Bross (37). In order to be able to bring a health product like the drinking ampoules with hyaluronic acid for osteoarthritis sufferers onto the market, patience and a lot of capital are necessary.

Two families contributed to the development of the biotech company Proceanis: The two parents of the founder Dr. Henning Jüchter and Heiko Bross. Some were doctors, the other former owners of a horse farm – both helped their sons in 2009 with researching the market, product development, warehousing and advising customers over the phone. “Without them we would hardly have made it over the first few meters,” remembers Heiko Bross. A small Hamburg apartment and a warehouse at the Jüchter family in Bergisch Gladbach are considered the cradles of the company that has been successful with the Arthrofill dietary supplement for a good six years. The ArthroFill joint complex combines hyaluronic acid with nutrients for bones, cartilage and connective tissue. Hyaluronic acid is the main component of synovial fluid, and advances in biotechnology enable it to be absorbed through food. This has been used in equestrian sports since the late 1990s.

This is how the nutritional supplement manufacturer Proceanis does it, for example. He no longer only sells his two hyaluron products “ArthroFill” and “Hyaluron filler” in pharmacies and cosmetic institutes, but since the beginning of 2016 also through his own online shop. “By bypassing retailers, we save their margins and can communicate directly with consumers. Their praise and suggestions for improvement help us to further develop our products. “

A reduction in cartilage mass can be observed from the age of 35, emphasizes Professor Christoph Bamberger, head of the Medical Prevention Center in Hamburg. The synovial fluid that nourishes the cartilage is only pressed into the cartilage tissue through movement. Dietary supplements that were often ridiculed in the past can also help and support this. Bamberger, who is also known as the anti-aging pope, recommends dietary supplements with hyaluronic acid. This substance is an important part of the synovial fluid and cartilage. “Studies show that hyaluronic acid has a protective effect,” explains the Alster expert. Hyaluronic acid is often injected. Oral preparations are also available for prevention. One example is Arthrofill. This joint nutrient complex supplies the body with 180 milligrams of hyaluronic acid daily. The recommended daily dose is 100 to 200 milligrams. The young company Proceanis brought the product onto the market.

When a Mexican business delegation visited Bremen, SIS presented two products from the young Hamburg-based life science company Proceanis, the dietary supplements “Hyaluron filler” and “Arthrofill”, the first for more beautiful skin and the second for healthy joints. In the German-speaking countries, the winner of the Beauty Award Germany 2016 already made around 400,000 euros in sales with its products last year.

Hyaluronic acid not only plumps up the wrinkles on the face, neck and décolleté, it is also the main component of the synovial fluid and, thanks to its viscous consistency, a damper and lubricant for all joint movements. It also keeps tendons and ligaments healthy and strong. If the body produces less hyaluronic acid, the hyaluronic acid damper in the joints also becomes thin, the natural “oil” no longer lubricates and the pressure load on the joint can be poorly cushioned. Taking hyaluronic acid can help relieve the pain and ease the discomfort. With a hyaluronic acid treatment (e.g. Proceanis Healthcare) you kill two birds with one stone and do something for your skin and joints.

Click here for the online article – Fit for Fun